With both teams losing their last respective league game, and suggestions of increasing pressure facing both managers, it was important for both Manchester United and Liverpool to get a result this weekend. Here’s UEFA licensed coach Rupesh Popat with the tactical breakdown of Manchester United’s dominance at Old Trafford against Liverpool.

Bang on by @Chris_Wilde difference in reaction from Martin Tyler to Benteke goal and the Martial goal #NotBiased pic.twitter.com/qHMSuVPIPj

As expected, Manchester United set up with a 4-2-3-1 system. For the first time this season, however, Schweinsteiger and Carrick lined up together in the double-pivot. Schneiderlin took Carrick’s place on the bench. De Gea also came into the side for his first start of the season. With Rooney absent following a hamstring injury, Fellaini played as the lone striker. United’s new signing, Anthony Martial, took a place on the bench. Liverpool, on the other hand, set up with a 4-3-3, which is generally how they have lined up since the injury of Jordan Henderson earlier in the season and with Daniel Sturridge still absent. Danny Ings replaced the suspended Coutinho on the left side of the forward line, which was questionable given the defensive duties that he would naturally have to perform in this role.

While some may have expected that the inclusion of Marouane Fellaini at centre forward would change United’s approach to the game, it was evident that United were actually not much more direct when in possession than in previous games. Fellaini has generally featured as a substitute for United this season, usually brought on as a ‘plan B’ when the team are in need of a goal. Following Fellaini’s introduction, United have often altered their approach in possession and looked to play directly into him, either from deep, long diagonal passes or from crosses in wide areas. However, with Fellaini featuring from the start, and the circumstances of his inclusion being different, Van Gaal decided to stick to his usual approach of trying to control the game by dominating possession. 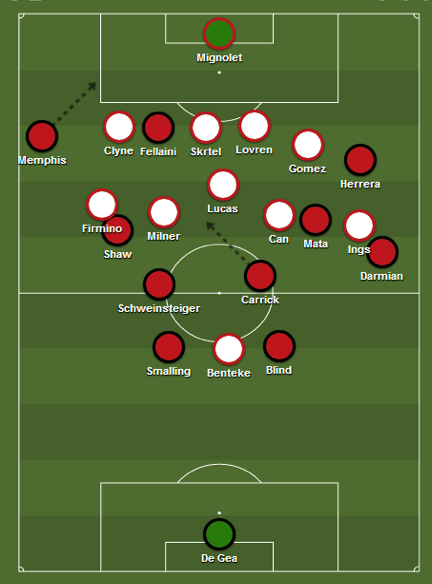 With Liverpool’s central midfield trio working hard to close the gaps between them and the back four, and Ings and Firmino pinned back in wide areas by Darmian and Shaw respectively, this meant that Michael Carrick could often pick up the ball in deep areas with both time and space to play. From this position, he could control United’s possession and help the team to progress the play up the pitch while looking for opportunities to penetrate. On a number of occasions in the first half, he played long-angled, penetrative passes in behind Liverpool’s full backs from deep areas to find Mata, Darmian and more frequently Memphis. However, when the ball did get into the attacking third, United lacked quality in the cross or final pass.

As a reaction to United’s poor end product in the attacking third, Van Gaal brought on Ashley Young for Memphis on the left side of United’s three attacking midfielders at half time. Almost immediately, Young dribbled at Clyne 1v1 in the left-hand channel and won the free kick that led to United’s first goal.

With Liverpool now behind and chasing an equaliser, Van Gaal decided to bring on new signing Anthony Martial. Perhaps he expected that, as Liverpool chased the game, Martial would increasingly find space to influence the game. For the second goal, United showed another rare piece of quality in the attacking third when Martial’s movement dragged Gomez inside and opened up the space between Ings (who was occupied by Darmian) and the Liverpool left-back. Herrera spotted the space and made an intelligent forward run in behind, which was found by the influential Carrick. This led to the penalty that was converted by Herrera himself and United finally sealed the win with a fantastic solo goal by Martial in the final minutes of the game. 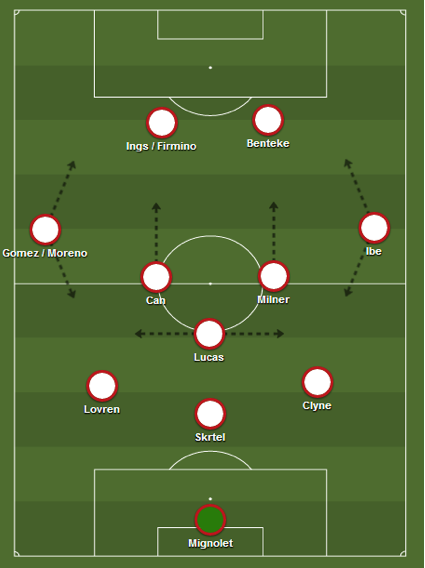 An alternative approach: Liverpool might create more chances, while maintaining their defensive organisation, in a 3-5-2 system.

Rodgers left with some thinking to do

Brendan Rodgers has since been criticised for the shape that he played and accused of playing players in the wrong positions. The truth is that Liverpool are currently missing some key players, which has forced Rodgers to change from the 4-2-3-1 to the 4-3-3 that is currently being used. With Henderson injured, Liverpool don’t really have another fit central midfield player to match his energy in the middle of the park. This is probably why Rodgers has opted to play Lucas and Can in a midfield trio alongside the more energetic Milner, to ensure that there is sufficient protection in central areas.

However, Rodgers has another problem. After the game, he himself admitted that Liverpool are not creating enough chances and that this is something he will look at. To maintain the protection that he craves in midfield, while ensuring that Liverpool creates more chances, it would not be a surprise to see Rodgers change Liverpool’s shape again, perhaps to a 3-5-2. This system would also take account of the players currently available to him and the way Rodgers wants his team to play: getting on the ball, initiating the play and creating chances. It would enable Lucas, Can and Milner to help control possession in midfield while maintaining defensive balance and allow Ings or Firmino to push further up alongside Benteke. This might mean that we see Lovren, Skrtel and Clyne playing at centre back and perhaps Ibe and Gomez or Moreno playing as wing backs.

With this change of shape, Liverpool could get their wide players higher up the pitch when in possession. The security of three centre backs providing balance behind the ball would give Liverpool’s wing-backs more freedom to enter the attacking third and create chances. When one of the wing-backs has the ball in the midfield or attacking third, it would also mean that Liverpool have more players ahead of the ball in advanced positions (both forwards and the opposite wing-back) and allow Milner or Can to make more penetrative forward runs ahead of the ball from midfield. Furthermore, Liverpool would still have the option to play directly into Benteke from wide areas, where appropriate. After using this shape with some success a few years ago, and the current system not quite working, Liverpool may be tempted to return to this 3-5-2 shape for their next game against Norwich City at home.