UEFA licensed coach Rupesh Popat on the tactical breakdown of Chelsea's win over Arsenal at Stamford Bridge this weekend.

UEFA licensed coach Rupesh Popat on the tactical breakdown of Chelsea’s win over Arsenal at Stamford Bridge this weekend.

Following a poor run of recent results in the league, Mourinho has faced a lot of media pressure and, therefore, he was looking for a win to dismiss the doubting voices. Arsenal, on the other hand, despite their mid-week disappointment in Europe, had shown good form in the league. They were hoping to repeat the strong performance shown against Stoke last weekend.

As expected, Arsenal set up with a 4-2-3-1 system and were unchanged from the side that beat Stoke in the league last week. Chelsea, however, made a few changes to the side that lost to Everton. Fabregas lined up alongside Matic in the double-pivot, with Mikel taking a place on the bench. Oskar, after featuring in the Champions League during the week, came into the side and played behind Costa in the attacking midfield trio. Pedro, who had been a doubt in the week, took a place on the right side of midfield. Zouma and Cahill, who played together against Maccabi Tel Aviv, formed the centre of Chelsea’s defence in a 4-2-3-1 shape.

The inclusion of Cahill and Zouma in the centre of defence, ahead of captain John Terry, suggested two things. First, Mourinho was keen to neutralise the threat of Walcott’s pace in behind Chelsea’s defence. Last week, we saw Walcott causing lots of problems for Stoke with his runs in behind and it was a good, penetrative forward run that created his goal.

With this in mind, Mourinho probably thought it was wise to put his quickest central defensive pairing up against Walcott, who has looked sharp after scoring a few goals in his most recent appearances. This proved to be a good decision, as Walcott made at least four promising forward runs in behind Chelsea’s defence during the first fifteen minutes. On the first two occasions, his forward runs were spotted and tracked by Gary Cahill leading to a safe conclusion.

Later on in the game, when Walcott poked the ball past Chelsea’s defence around the half-way line, Zouma used his speed to make an effective recovery run towards the ball where he challenged Walcott and regained possession. Together, Cahill and Zouma prevented Walcott from seriously influencing the game. 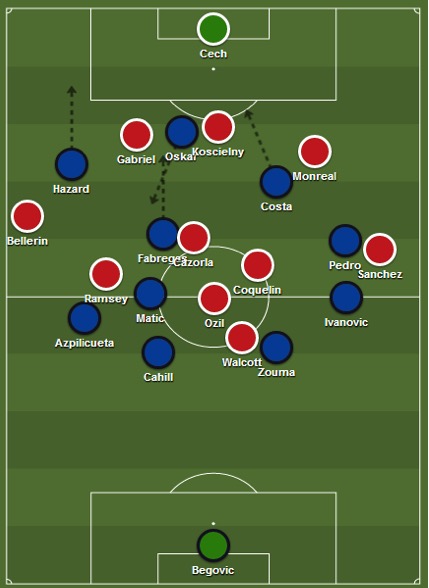 Fabregas intercepts a loose pass from Arsenal in the first half and Chelsea counter-attack.

The second reason behind this selection was about balance and security when in possession. Earlier in the season, the Chelsea manager brought on Zouma at half time against Manchester City when the team were behind. After the game Mourinho explained that he had expected Chelsea to dominate possession and territory in the second half, which meant that the defensive line would be generally positioned around the half-way line.

By having their defensive line high and therefore reducing the gaps between their defensive and midfield units, Chelsea would be in a better position to stifle Manchester City’s counter-attacks high up the pitch when possession was lost. However, this meant that Chelsea would also have to leave space in behind their defensive line, as they pushed to get back into the game. Mourinho thought, however, that in case Manchester City’s counter-attacks did get beyond Chelsea’s first defensive line of pressure following the transition, Zouma and Cahill would be more capable, than John Terry, of quickly recovering back into their own half to track the dangerous forward runs of Sergio Aguero. Perhaps the selection of Zouma and Cahill against Arsenal, therefore, meant that Mourinho also expected Chelsea to dominate possession and territory in Arsenal’s half in this game.

With Fabregas selected to play alongside Matic in the double-pivot and Oskar playing just behind Diego Costa, Chelsea certainly had the personnel to be able to dominate possession and territory against Arsenal. These particular players were always better suited and perhaps prefer being in possession than playing out of possession. Mourinho’s selection, therefore, determined the playing style that Chelsea would try to deploy in this game and they did indeed had a good share of possession in the first half. With Hazard and Pedro taking up wide attacking positions, Chelsea also possessed a real counter-attacking threat when Arsenal lost the ball.

One of the key features of Chelsea’s play in this game was the speed and penetration of their counter-attacks. Throughout the game, Chelsea looked to counter-attack from Arsenal’s corners. After winning the first header inside the box, Chelsea’s players such as Costa, Pedro and Hazard made quick forward runs ahead of the ball from deep to attack the space around Arsenal’s covering defenders.

From open play, Chelsea often picked up the loose ball in midfield from Arsenal’s misplaced passes or made good tackles in midfield to regain possession before launching a quick counter-attack. With Arsenal’s players sometimes caught ahead of the ball in advanced positions, Chelsea were able to exploit the spaces in front of and to the side of Arsenal’s back four. Diego Costa drifted into the left-hand channel on a number of occasions, following a transition, to receive the ball to the side of Arsenal’s central defenders before heading towards goal.

Early in the second half, Fabregas pounced on a loose pass by Sanchez in midfield and slid the ball into Costa, who had drifted into the left-hand channel to the side of Arsenal’s centre backs. It was from this position that Chelsea were able, soon after, to win the free kick that led to their first decisive goal. 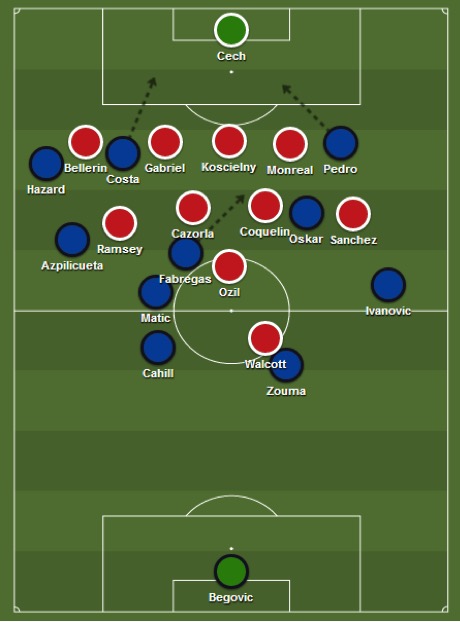 Cahill and Zouma maintain balance behind the ball, as Chelsea hold possession, in case Arsenal regain and counter-attack through Walcott.

A lot of the talk after the game has focused on Gabriel’s sending off just before half-time following provocation from Diego Costa. Of course, playing with ten men would have always made it difficult for Arsenal in the second half. However, the early goal that they conceded is what completely took the game away from Arsenal.

After the break, Chambers was brought on for Coquelin to fill the gap in the centre of Arsenal’s defence. Aaron Ramsey moved into the centre of midfield alongside Cazorla and Ozil moved to the right of midfield. This left Arsenal with a 4-4-1 shape.

In the early minutes of the second half, Arsenal looked compact and defended with organisation, while Chelsea dominated possession and probed for an opportunity to penetrate. If Arsenal had been able to ride the storm and avoid conceding so early in the second half, they might have been able to take something from the game. Unfortunately, a lapse in concentration from Laurent Koscielny when defending a free-kick allowed Zouma to head in the goal, which took the game away from Arsenal.

While the first sending off was a turning point, the extent to which it affected the remainder of the game was still in Arsenal’s hands. The best teams are able to capitalise on or take control of the key moments in the game, even when those key moments are going against them. By conceding so early on after the sending off, Arsenal killed any remaining chance of getting something from the game.

From then on, Chelsea managed the game by keeping possession and changed their personnel to ensure that balance and defensive organisation was maintained. Cazorla picked up a second yellow card late on, which reduced Arsenal to nine men, and the win was finally sealed with Hazard’s goal in the final minutes of the game.