Here's our Premier League social media roundup on the best matches of the weekend of 19th-20th September...

Our friends Viva Football Calcio have again sent us their Premier League team of the weekend with Martial and Wilson returning for a second nomination whilst everyone else in the team are welcome here for the first time. 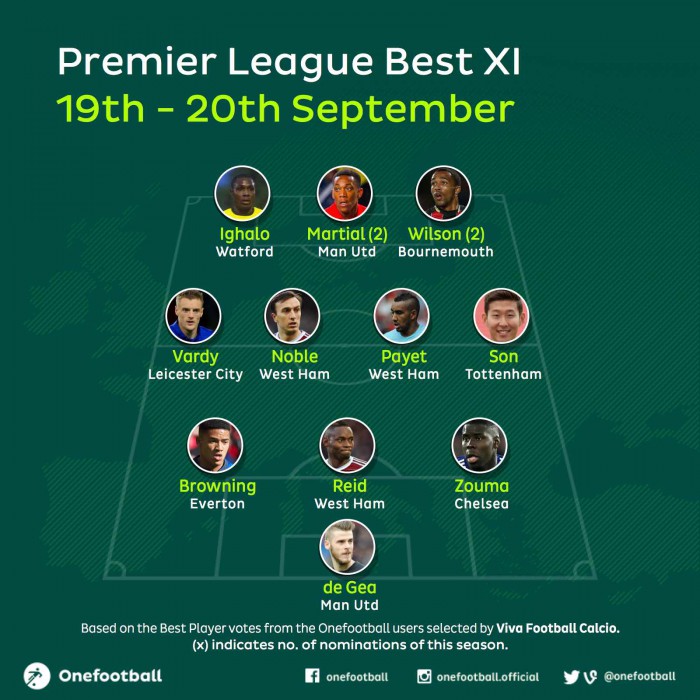 The obvious place to start for our weekend Premier League review would be the first match and most controversial; Chelsea vs Arsenal at Stamford Bridge…

The defeat to arch rivals Chelsea would have left Wenger fuming at the mouth and two victims within the sights of his bloodshot eyes; Diego Costa and Mike Dean. Arsenal fans weren’t too happy with them either…

Whatever Arsenal do, City can do better. After defeat to Juventus in mid-week, Manchester City lost their 100% league record at home to West Ham. All credit to Bilic and Co.

‘What a waste of money!’, erupted around St. Mary’s in reference to Anthony Martial’s price tag. Not by Southampton fans, but sarcastically by Manchester United fans as the young, expensive Frenchman hit two against the Saints. Let’s hope he can keep it up.

Fantastic game to watch. #saintsfc should feel good that Pelle has found his form, while #mufc must be thrilled about Martial

Rodgers hangs on by the skin of his very, very white teeth as Liverpool fail yet again to get three-points. It’s five games in all competition now without a win for the Reds. Can he last much longer? It’s Carlisle, Aston Villa and Sion up next and if he doesn’t win all three it could spell the end of his Anfield reign.
Video courtesy of Redmen TV.